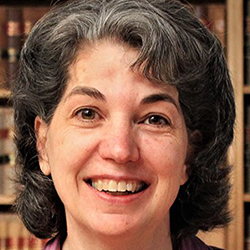 Molly Townes O’Brien is an Associate Professor at the Australian National University College of Law, where she teaches evidence, litigation and dispute management and human rights.  Molly has served on the law faculties of Emory University and the University of Akron in the United States and the University of Wollongong. Prior to entering the academy, she worked as a judicial clerk and as a public defender. She has an A.B. from Brown University (1982), a J.D. from Northeastern University (1986), and an LL.M. from Temple University (1997). She was Director of Teaching Development at the Australian National University College of Law and is a Senior Fellow in the Higher Education Academy.  She has written articles on race politics, criminal law, trial advocacy and student wellbeing. Her books include Civil Procedure, (2nd edition), co-authored with Stephen Colbran, Sheryl Jackson, Peta Spender, and Tania Penovic, (2019) LexisNexis; New Directions for Law in Australia: Essays in Contemporary Law Reform, co-edited with Ron Levy, Simon Rice, Pauline Ridge and Margaret Thornton, (2017) ANU Press; and Trial Advocacy Basics (2nd edition), co-authored with Gary Gilden, (2016) National Institute for Trial Advocacy Press.  She has also written and made presentations relating to her recovery from a severe Traumatic Brain Injury she sustained due to a bicycle accident in 2013.