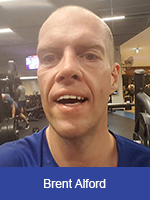 Since he sustained a severe Traumatic Brain Injury (TBI) in 2006, Brent has embarked on a career as a motivational speaker, and has given some 600 talks to young people and adults, mainly in schools and hospitals. Drawing on his own lived experience of TBI, his theme is ‘making smarter and better life choices’. He joined Brain Injury Matters – a not-for-profit self-advocacy organisation that aims to empower people living with an Acquired Brain Injury (ABI) – in 2009, and was elected its President in 2019.