Concussions – a “mild” Traumatic Brain Injury (TBI) – are an urgent public health concern, specifically, for those injured who don’t make a spontaneous, uneventful recovery within expected timeframes and for the cumulative, potentially disabling, impacts of multiple concussions.

“The arithmetic on this is as stark as it is simple”, says Nick Rushworth, Executive Officer of Brain Injury Australia and Conference Chair. “The last time something approximating national incidence data was collected was in 2004-2005. In that year, 23,000 people were hospitalised with a TBI. The rough rule of thumb is around 80 per cent of those TBIs are going to be designated ‘mild’. And all but around, say, 10 to 20 per cent of the 18,000 of those people with ‘mild’ TBIs could have expected to have made a full recovery within 3 to 6 months. That still leaves 3,000 or so people who…didn’t – what the literature refers to as the ‘miserable minority’, those with persistent ongoing symptoms such as headaches, dizziness, and problems with everything from short-term memory through to behaviour. 3,000 or so people. Every year.”

“But that’s not all, clearly.” Nick continues. “Every year in Australia more than 3,000 people are hospitalised after being concussed, just from playing sport. But triple that number won’t seek medical attention. And as many as ten times that number won’t even report their concussion to teammates, coaches or family because they fear being removed from play. Or they don’t even know they’re concussed. Nine out of ten people hospitalised with concussion don’t recognise the injury. And then you’ve got to remember that, when our public hospitals are under such cost pressures, most people who present at casualty with ‘mild’ injuries won’t be admitted. Though the ‘tip of the iceberg’ analogy is over-used, the true numbers of people long-suffering ‘mild’ injury is anyone’s guess.” 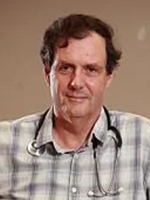 Brain Injury Australia’s 8th National Brain Injury Conference has assembled a team of expert clinician-researchers to deliver a Pre-Conference Workshop on concussion/ “mild TBI on Tuesday 28th June at The Abercrombie Building, The University of Sydney Business School, NSW. The team will be led by Gary Browne (pictured, left), Professor of Emergency Medicine, and Chair of the Discipline of Emergency Medicine at the University of Sydney. Since 2006, Professor Browne has been Director of the Kids Concussion Service at the Children’s Hospital Institute of Sports Medicine in Westmead, Sydney. He has over 40 years of experience in acute and paediatric care for TBI, and is the author and editor of over 100 peer-reviewed papers and 20 textbooks on paediatric emergency and sports and exercise medicine.

The Pre-Conference Workshop will provide instruction on evidence-based best practice for: on the scene or sideline care; the role of brain imaging; post-injury clinical assessment; developing a concussion action plan; protocols for optimum return to play and “return to learn”; the role of exercise and timing of special interventions to hasten recovery; “post-concussion syndrome”; and the potential long-term consequences of concussion, including the progressive degenerative neurological disease, Chronic Traumatic Encephalopathy (CTE). 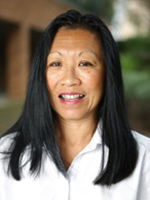 In delivering the Pre-Conference Workshop, Professor Browne will joined by Associate Professor Rhonda Orr (pictured, left) from the Discipline of Exercise and Sport Science at The University of Sydney. Associate Professor Orr is an exercise scientist and experienced researcher across paediatric, adolescent, adult and elderly populations with expertise in concussion and injury surveillance and monitoring sports performance in junior and senior athletes from grassroots to elite level in a range of team sports. 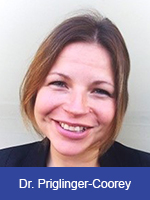 Dr. Priglinger-Coorey is a neurologist specialising in stroke, concussion and headache at Royal North Shore Hospital in Sydney. She is the medical lead of the Hospital’s Concussion Clinic. She was previously a specialist in neurology in Germany and has worked in industry as associate medical adviser for pharmaceutical company Boehringer Ingelheim. Between 2013 and 2015, she completed her stroke fellowship at Royal North Shore Hospital and has undertaken additional training in emergency medicine, intensive care medicine and psychiatry. Dr Priglinger-Coorey teaches the extended/ intensive care course for NSW Ambulance and is a tutor for The University of Sydney’s Master of Science in Medicine (Pain Management) course. 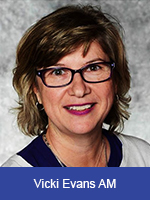 Vicki Evans AM has been involved in neuroscience nursing for over 35 years in a variety of positions – public and private – in both Australia and the United States. She is well-known on the neuroscience lecture circuit as well as for her many publications. She has held the Executive position of Vice President, World Federation of Neuroscience Nurses and Neuroscience Clinical Nurse Consultant for over 25 years. She is author of the board game “Cerebral Tap”, and author of a 2022 concussion video for schools and has been an advisor on Australian television programs A Country Practice, All Saints and Home & Away. She now leads the Concussion Clinic at Royal North Shore Hospital. In 2021, Vicki was made a Member of the Order of Australia (AM) for “Services to Neuroscience Nursing and Professional Associations”. 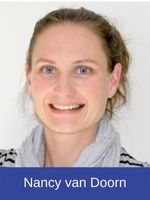 Nancy van Doorn is an Accredited Exercise Physiologist specialising in paediatric and adolescent exercise physiology at the Children’s Hospital Institute of Sports Medicine (CHISM) at The Children’s Hospital at Westmead, Sydney. She has extensive experience conducting exercise testing and providing exercise prescription for children and adolescents with a wide range of chronic and complex conditions. Her research area includes exercise interventions for children with chronic disease and interventions to improve fundamental motor skill development. Nancy is also a Lecturer at The University of New South Wales in the Bachelor of Exercise Physiology program.