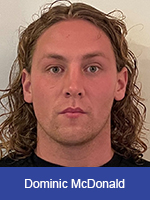 Aged 28, Dominic has been living with an Acquired Brain Injury (ABI) since 2012, when has was diagnosed with Auto-Immune Encephalitis. Prior to his first acute illness, he had lived a very full life studying economics and he was a competitive rower. Nearly nine years, and six relapses in illness, later, he has discovered just how difficult life with a brain injury can be. The past two years of his rehabilitation have been the most successful of his journey, because he feels he’s been able to thrive under a well-structured and defined rehabilitation program.