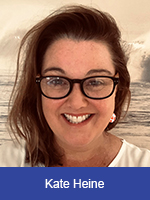 Kate has worked in the world of kids and therapy since she was 18, first as a therapy assistant in a Hippotherapy centre in California, then as a physiotherapist since 1997. She has always specialised in kids with neurological conditions and it was while working at the Victorian Rehabilitation Centre in Melbourne that she discovered her true passion for working with kids and families impacted by Acquired Brain Injury (ABI). After suddenly losing a parent in 2002, she developed a family camp for kids with ABI, which became “Heads Together for ABI”. Almost 20 years later, it has grown into a thriving non-profit with five programs that support, connect and empower families, young adults, parents, teens and kids.