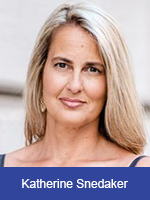 Katherine is the CEO and Founder of PINK Concussions – a non-profit, focused on female brain injury from sport, domestic violence/assault, accidents or military service. Katherine is an international speaker, brain injury professional, published researcher and has brain injury in her family. Snedaker has presented on sex differences in brain injury for organizations such as the US Department of Veterans Affairs, Boston Children’s Hospital, Ohio State University, and the International Brain Injury Association. Her work with PINK Concussions has been covered by media across the globe – including the BBC, NBC News, Fox News, ESPN and Al Jazeera – and has been featured in Scientific American, Marie Claire, US News and World Report and The Washington Post.