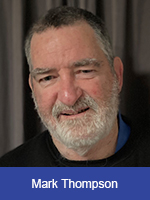 Mark was born in Ballarat in 1958. After leaving school he became a painter. He married, then divorced 13 years later. He had a real passion for sailing, competing in the Melbourne to Hobart Yacht Race nine times, the Sydney to Hobart thirteen times. He was a member of the winning crew for each race, once. In 1995 he was involved in a drowning accident – sustaining a hypoxic brain injury – and had to rebuild his life. It was then that he saw the inequality, which led him down the road to advocacy. He has achieved many accolades, including carrying the Queen’s baton to the 2006 Commonwealth Games in Melbourne. He works as an advocate with the Victorian Advocacy League for Individuals With Disability (VALID).