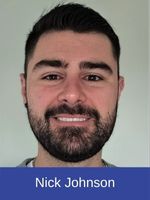 At the age of 19, Nick Johnson’s father received a posting order from the Australian Army to relocate to Brisbane from Darwin. Nick was young, had a good job and like any young adult, was settled with a sense of independence. So he decided to try and sell his car. If the car sold, Nick would move with the family to Brisbane. If not, Nick would stay in Darwin and continue with his life there. On the evening of November 17th 2011, Nick joined a potential buyer in the passenger seat for a test drive. The driver lost control and ran off the road at high speed. Due to amnesia, Nick has no memory of the accident. But he required extraction from the car with “the jaws of life”, was resuscitated, and subsequently spent two weeks in a medically-induced coma. Alongside a severe Traumatic Brain Injury (TBI), Nick also sustained significant spinal injuries and a shattered pelvis. After two months in Royal Darwin Hospital, Nick “graduated” to outpatient rehabilitation at the Brain Injury Rehabilitation Unit at the Princess Alexandra Hospital in Brisbane. In the years since, Nick began participating in The Skills to Enable People and Communities (STEPS) program of Queensland’s Acquired Brain Injury Outreach Service. After completing the program, Nick began volunteering at STEPS in a voluntary capacity and is now studying to become an Occupational Therapist and is due to graduate in late 2022.