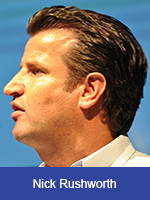 Nick has been Executive Officer of Brain Injury Australia – the national peak advocacy organisation representing the needs of the 700,000 people living with brain injury, their families and carers – since 2008. He was also President of the Brain Injury Association of New South Wales between 2004 and 2008. In 1996, Nick sustained a severe traumatic brain injury as a result of a bicycle accident. Before joining Brain Injury Australia in 2008, Nick worked for the Northern Territory Government setting up their new “Office of Disability”. Formerly a producer with the Nine Television Network’s “Sunday” program and ABC Radio National, Nick’s journalism has won a number of awards, including a Silver World Medal at the 2003 New York Festival, a National Press Club and TV Week Logie Award. He serves on a variety of governmental and research advisory committees, is a Director of the Australian Federation of Disability Organisations, and is an Ambassador for the National Organisation for Fetal Alcohol Spectrum Disorders and for the Queensland Brain Institute’s concussion research. Between 2017 and 2019, he facilitated a “Community of Practice” in brain injury for the National Disability Insurance Agency.