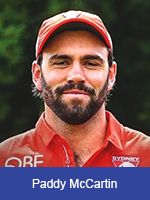 Paddy McCartin is a former professional Australian Rules Football player who has sustained eight concussions during his career. Paddy was the number one pick in the 2014’s Australian Football League (AFL) draft, joining St. Kilda. He was delisted by the club at the end of the 2019 season, to allow him time to with complications resulting from repeated concussions. Paddy has set up the “Helping Hands Mentoring Program”, which “moulds mindsets into resilient fortresses of self-belief with relatable, hard-hitting messages”. This year, he joined the Sydney Swans Victorian Football League (VFL) team.