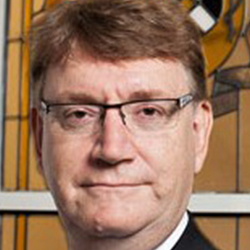 Professor Malcolm Hopwood is the Ramsay Health Care Professor of Psychiatry at the University of Melbourne. His research interests include neuropsychiatry, psychopharmacology and clinical aspects of mood and anxiety disorders. Professor Hopwood assumed this post in early 2013. From 2017 to 2018 he was the Interim Head of the Department of Psychiatry at the University of Melbourne. Professor Hopwood completed and received his MBBS and later his MD at the University of Melbourne and also completed a Masters of Psychological Medicine at Monash University.  He received his Fellowship of the Royal Australian and New Zealand College of Psychiatrists in 1993. Prior to 2013, Professor Hopwood led the Psychological Trauma Recovery Service, incorporating the Veterans Psychiatry Unit and the Victorian Brain Disorders Program at Austin Health. He also has held several senior positions within the Royal Australian and New Zealand College of Psychiatrists including past Chair of the Victorian Branch and past Chairmanship of the Board of Research and in he was President of the College from 2015 to 2017. He is also currently President Elect of The Asian Federation of Psychiatric Associations.