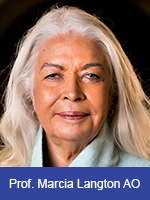 Marcia is an Aboriginal woman of Iman descent. She is an anthropologist and geographer with a strong research track record on Aboriginal alcohol use and harms, family violence, Aboriginal land tenure, management of environments and native title, and aspects of Aboriginal culture, art and performance and the shift to modernity. Marcia has held the Foundation Chair of Australian Indigenous Studies at The University of Melbourne since 2000. Professor Langton is a Fellow of The Academy of Social Sciences, a Fellow of Trinity College, Melbourne and an Honorary Fellow of Emmanuel College at The University of Queensland.