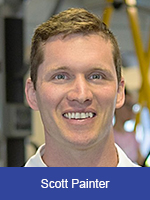 In 2007, seventeen-year-old Scott was diagnosed with a brain tumour. The surgery to remove the tumour led to three strokes, and left Scott having to learn to walk, talk and eat again. In 2014, graduating with a Masters of Clinical Exercise Physiology – specialising in neurological rehabilitation – from Southern Cross University in 2014, Scott started work in clinical rehabilitation in the Northern Rivers and then in Brisbane. Scott is now Senior Clinical Exercise Physiologist specialising in brain injury rehabilitation with Headway ABI Australia on the Gold Coast.