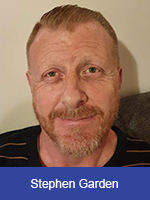 In 2006 Steve, emigrated from England to South Australia with his wife and family to start a new chapter in their lives with South Australia Police (SAPOL). Steve had been a career detective with Greater Manchester Police, finishing his service with the Force Major Incident Team dealing with offences of homicide and counter terrorism. In 2013, while serving as Officer-In-Charge at Crystal Brook Police Station – a town in the Mid North of South Australia, 200 kilometres north of Adelaide – Steve suffered a serious head injury during an arrest, an injury which significantly altered his career path and personal life. Following the assault Steve moved to Adelaide where he worked in more specialised roles within Major Fraud, Equity and Diversion Branch and finally at the Academy training up would be Detectives. As an indirect result of the 2013 assault Steve left SAPOL in 2019. He is now a Team Leader, Investigations with SafeWork SA.